1969 was a year giants rocked the earth, and they wanted big amps. By that point in history, rock music was the baddest man in the whole damn town. Stadiums and outdoor festivals was where the action was—Madison Square Garden for chrissakes. Fifty watts just wasn't enough to move that chick in the 61st row in her hand-embroidered bellbottoms. It wasn't as if nobody was filling the void—witness the stacks of Marshalls, mountains of Hiwatts, and truckloads of Dual Showmans doing more to promote tinnitus in a single generation since WWII.

Only In America
Ampeg needed to compete. The team of amp designer Bill Hughes and Roger Cox—with input from Bob Rufkahr and Dan Armstrong—set about to create what Cox referred to as "the biggest, nastiest bass amplifier the world had ever seen." Using the same sort of madness that drove Dr. Frankenstein, the team came up with a 300-watt all-tube phantasmagoria they called the Super Vacuum Tube—or SVT, to save on vowels. To fully grasp the monstrosity of their creation, the SVT's 300-watt output stomped the deafening 200-watt Marshall Major by a full 100-watts!

Unveiled at the 1969 NAMM show in Chicago, the SVT head alone weighed 95 lbs and contained fourteen tubes, six of which were massive 6146 power tubes. To heat all those tubes, massive transformers with magnetic fields powerful enough to cause genetic mutations were necessary. And what kind of speakers were able to handle all that power? Nothing less than two cabinets sporting eight ten-inch speakers and weighing 105 lbs. each.

After surveying his creation, Cox was actually concerned about potential liability—when your engineers warn of the possible harm their designs could cause, you'd better listen. Ampeg's management did and devised a warning label which read:

"THIS AMP IS CAPABLE OF DELIVERING SOUND PRESSURE LEVELS THAT MAY CAUSE PERMANENT HEARING DAMAGE."

Her Satanic Majesty's Shakedown Cruise
Some say we make our own luck, but they're usually the people with all the luck. Luck came to Ampeg, not from their own doing, but by the lack of knowledge concerning international voltages on the part of the Rolling Stones. It seems the Stones shipped their Fender amps over to the States to rehearse for their soon-to-be-legendary '69 world tour, plugged them in, switched them on, and the resulting smoke and burn first made the roadies think Keith had nodded out again, until they remembered that the amps were set up for UK voltage.

The Stones may have been "The Greatest Rock n' Roll Band In The World," but like all bands, they liked to get free gear. In a panic, now deceased Stones keyboard player and road manager Ian Stewart contacted Rich Mandella, Ampeg's Hollywood liaison, desperately begging for amps for the tour that was now only weeks away.

Mandella, knowing a good thing when he saw it, loaded up all the SVT prototypes and some old 4x12 cabs into his pickup and headed down to the Warner Brothers lot where the Stones were rehearsing in an unused soundstage. Keith, Mick Taylor and Bill Wyman plugged in to the SVT prototypes and proceeded to turn them up to a level that reduced the un-hip to flaming piles of goo. The Stones may have had sympathy for the devil, but they gave no such kindness to the SVT prototypes. Mandella began to notice that the prototypes were getting close to meltdown under Keith's relentless bashing. According to Mandella, "Everything he was doing in rehearsal just kept getting louder and bigger and crazier, with two or three heads per person. I'd watch the amps, and when I could see one was about to explode, I'd just switch heads." 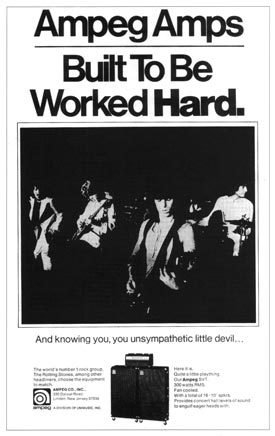 Since those prototype SVT heads were the only ones in existence—production was still a ways away—it was decided in a very smokey room that Mandella would accompany the Stones on the tour as their personal Ampeg technician. While the Stones rocked, and the audience grooved, and the Hell's Angels kicked the living crap out of everybody within a pool cue's length, Rich Mandella was behind the backline making sure everything was sorted. If you want a sample of the mayhem, check out Gimme Shelter, the Stones' own documentary of the 1969 world tour. But if you wanna hear those early SVTs blasting for all they're worth, rush right down and pick up Get Yer Ya Ya's Out, the best live album ever made.

In The World Of 300-Watt Amps, Perspective Is Hard To Come By
Since then, the SVT has become the bass amp that all rock bassists dream of, whether they're famous or completely unknown. Ampeg has modified the SVT concept for a wider variety of sounds, but fortunately, they still make the SVT-VR, which are virtually identical to the ones the Stones used to put their Jack Daniels bottles on top of. (The SVT-Classic is also available, and is very similar to the original.)

Former Bass Player editor Scott Malandrone put the SVT in perspective this way: "The SVT has done for the sound of electric bass what the Marshall Super Lead had done for the electric guitar—it would give the instrument an identity." We couldn't say it better ourselves.

The Story Behind the Sound

In 1946, Everette Hull, an acomplished pianist and bass player, organized a partnership with Stanley Michaels under the name "Michaels-Hull Electronic Labs." Their mission was to produce a new microphone pickup that Hull designed. The pickup was fitted on the end of an upright bass and was dubbed the Amplified Peg or "Ampeg" for short.

In 1949, Hull became the sole proprietor and changed the name of the company to the Ampeg Bassamp Company. Since that time, Ampeg has produced some of the music industry's most innovative and memorable products, satisifying the needs of musicians all over the world. Many of these products feature incredibly unique features and performance capabilities resulting in six U.S. patents under the Ampeg brand name.

In 1960, a design engineer by the name of Jess Oliver created a combo amplifier with a chasis that could be inverted and tucked inside the speaker enclosure, protecting the inner workings and increasing the portability of the the amp. Nicknammed the "Portaflex," this amplifier became the standard in bass combos throughout the 60's and 70's.

Also in the early 60's, Ampeg was the first company to incorporate reverb in an amplifier. The Reverbrocket preceded Fender's Vibroverb (often thought of as the original) by nearly 2 years. In 1969, Ampeg set out to design the most powerful amplifier ever made. At that time, 50-watt amps were considered more than adequate. 100-watt amps were considered "plenty loud." Ampeg, however, not only harnessed 300 watts of pure tube power but actually created a new valve (tube) technology - Super Valve Technology, or the SVT. Now the most sought after stage amplifier, the SVT has proven its road worthiness on stages around the world.

In 1986, St. Louis Music, Inc purchased Ampeg and continues the tradition of making quality, musician-satisifying products. The current series of Ampeg Classic models, Pro Series products, "B" Series heads and combos as well as the updated re-issue Diamond Blue Series are among the latest in the evolution of the professional, innovative and feature laden amplifiers available.

Winding through 288-pages, authors Gregg Hopkins and Bill Moore detail the epic history of a music industry giant: From Everett Hull's ground breaking patent, the first "Amplified Peg", to the creative and developmental processes involving over five decades of electronics. From instruments and amplifiers, to the eventual rebirth of Ampeg after incorporation by St. Louis Music, Inc, The Story Behind the Sound supplies readers with every thing they ever wanted to know about Ampeg, but were afraid to ask. Not only does Ampeg recount historical fictions, but also serves as a fifty-year corporate and musical chronicle containing product descriptions and time lines. Ampeg also features spotlight articles on key amps, instruments, people, and features technical appendices, not to mention foreword by Les Paul. Long live bass.

"The creations of the Ampeg Musical Instrument Company have played a major role in the development of popular music. This book tells the tale of this extraordinary company on its fiftieth anniversary, weaving together the American success story of the company, founder, the role of key inventors and inventions, and the development of innovative music equipment products—all against the backgrounds of American pop music and corporate competition in the music industry".